View basket “Current Climate (Download)” has been added to your basket.

“As his 81st birthday hoves into view, the great British pianist Stan Tracey and his tenor-sax partner Bobby Wellins record an all-Monk programme for the first time in over half a century of regularly visiting his pieces. This live session from London’s Bull’s Head shows just how attuned to Monk’s wayward thinking Tracey and Wellins are – but also how distinctively they remake him. Tracey’s relish for full-on swing brings episodes of rollicking drive that Monk would have been more likely to fragment, and the sardonic snort with which the two hit the accents on Bolivar Blues comes from an eager certainty that was often not displayed by sidemen on early Monk recordings. Wellins’ mix of preoccupied insinuations and sudden cries beautifully suits these unique compositions (I Mean You, Locomotive and six more). Tracey’s Round Midnight is one of the great versions, and the rhythm section of Andy Cleyndert and Clark Tracey are right on the case.”

“As pianists, Ellington and Monk had much in common, but there was no mistaking one for the other. Stan Tracey has much in common with both, but there’s no mistaking him, either. He’s just as individual now, something he emphasises with another unique voice, tenor saxophonist Bobby Wellins, on this marvellous live quartet session recorded a few months ago. Tracey, bassist Andy Cleyndert and drummer Clark Tracey form a rhythm section that could swing a Chinese emperor’s terracotta army, and the quartet’s joyous response to an all-Monk programme is an example of the kind of ego-free jazz that happens when a band of outstanding musicians is on song. It’s a feeling that can’t be adequately explained to anyone who is not into the music and, for those who are, no explanations are necessary. Enough said.”

“Modern jazz has been built on the innovations and sheer individualism of musicians such as Thelonius Monk and so it is of little surprise that other jazz artists should wish to pay tribute to him, with Jerry Gonzalez and the Fort Apache Band’s ‘Rumba para Monk’ being an outstanding example. While a plethora of these exist, ‘Play Monk’ has the considerable merit of playing Monk’s compositions on the quartet’s own terms and sounds all the better for it. Throughout there is a timeless feel to this live session, recorded at the Bull’s Head in Barnes. What impresses most is the space afforded between notes by the trio with Wellins able to effortlessly join in at the appropriate moment. This is clearly a band at ease with itself and enjoying each other’s company. Of all the compositions ‘Blues Bolivar’ is most Monk-like in execution with Wellins providing a glorious direct solo that is reminiscent of late 1950s Sonny Rollins. On ‘Well you needn’t’ the rhythm section bubbles under the surface, with Clark Tracey particularly inventive on drums, and Stan partakes in long modal runs, stretching the notes to their fullest. The sheer lyricism of Bobby Wellins come to the fore on ‘I mean you’ and both Tracey and Wellins duet to good effect on Monk’s Mood’, while Tracey solos on a mournful version of ‘Round Midnight’. The sound quality for a live recording is exceptionally good and the audience not in the least bit intrusive. Monk would have approved of this hommage.” 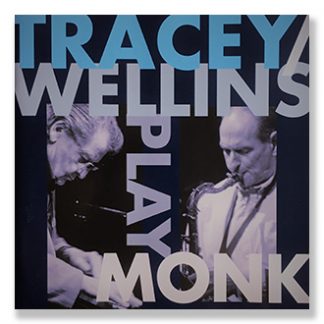