“I’ve always had a particular fondness for A Child’s Christmas in Wales because it evokes so many memories of the festival when I was a child. I was, therefore, delighted when Clark suggested that I should write something based on Dylan’s story and wondered why I hadn’t thought of it first. I hope the music reflects some of the pleasure it has given me.” Stan Tracey.

“Of course, Tracey has already visited Thomas’s work to produce one of UK jazz’s most enduringly popular albums, the exclusively musical (in its original version) Under Milk Wood (1965); here, however, he intersperses his eight compositions with seven narrations, read with impressive sensitivity and intelligence by grandson Ben Tracey. The resulting album is an unalloyed delight: Tracey’s joyously pungent pieces reflect the spirit of Thomas’s prose-poem perfectly, descriptions such as ‘a boy the spit of myself, with a pink-tipped cigarette and the violet past of a black eye, cocky as a bullfinch and of Auntie Hannah, steeped in parsnip wine, singing of ‘bleeding hearts and death’ memorably complemented by the pithily witty piano of Tracey himself, Allen’s lucid and emotive saxophones and a fine-tuned but muscularly propulsive rhythm section. Ben Tracey’s contribution also deserves the highest praise; Thomas’s unique mixture of poetic eloquence, barbed wit and nostalgic sentiment is an elusive beast to capture, but he manages it perfectly; overall, this album is a worthy successor to its illustrious sixties predecessor.”

“A Child’s Christmas is a gorgeous thing…this is a stone delight. Just one word – “listen!””

“Tracey’s imaginative, rhythmically charged music is a vivid complement to the rhythms and language of Thomas’s prose.” 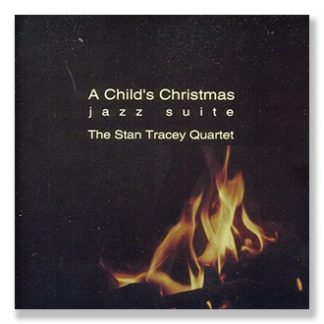 You're viewing: A Child’s Christmas £8.99
Add to basket