“In Flanders fields the poppies blow / Between the crosses, row on row, / That mark our place; and in the sky / The larks, still bravely singing, fly / Scarce heard amid the guns below. Those lines, the opening of the much loved poem written in 1915 by John McCrae, a Canadian soldier and physician who had fought in the Second Battle of Ypres, came to mind while I was listening to The Flying Pig, Stan Tracey’s new album. Those who know about such things will recognise Tracey’s chosen title as an allusion to a particular type of gun used by British forces during the Great War. Indeed the titles of all the six original compositions on the CD, played by the pianist’s current quintet, make such references, either to wartime weapons or places or soldiers’ sayings. The inspiration is the experience of Stan’s father, who served in the East Kent Regiment and, still only 18, was wounded on a Flanders battlefield in the year McCrae wrote the poem (he survived capture and imprisonment by the enemy and died in 1957, aged 60). more/less For those uncertain about the most suitable way to acknowledge next year’s centenary of the start of the war to end all wars, and perhaps ambivalent about the British government’s apparent determination to turn the event into a great patriotic celebration, here’s a solution: buy a poppy, by all means, but also spend some time listening to The Flying Pig. There is nothing programmatic, overtly descriptive or propagandist about the music. This is not a jazz version of Joan Littlewood’s Oh! What a Lovely War, but simply a very fine contemporary version of the sort of post-bop jazz associated with the Jazz Messengers and the Horace Silver Quintet in the late 1950s and early 1960s. There are no pretensions, no extraneous flourishes: just music of real substance, played by Tracey with his son Clark on drums, Andy Cleyndert on bass, Mark Armstrong on trumpet and flugelhorn and Simon Allen on saxophones. Given that the two Traceys and Cleyndert have formed a regular trio for several years, it’s not unexpected to find that the rhythm section runs on well lubricated ball-bearings. The surprise for me is Armstrong, whose solos evoke the best work of the young Freddie Hubbard, characterised by a gloriously burnished tone and a relaxed intensity but without Hubbard’s occasional tendency to get hung up on repeated phrases. He and Allen (whose alto saxophone solos are particularly enjoyable) combine to create the kind of lean front-line blend that is ideal for this material. One of the pieces is called “Ballad for Loos”: a reference to the particular battlefield in northern France where Stan’s father was wounded. That’s the location of the photograph above, which shows Stan (centre) and Clark (right) with Ben Tracey, Stan’s grandson. (A couple of years ago Ben contributed the narration to an album of Stan’s inspired by and titled after Dylan Thomas’s A Child’s Christmas in Wales.) In an interview with Alyn Shipton in the latest issue of Jazzwise, Stan says that nowadays he prefers working with the trio or his quartet; those line-ups, he says, offer him more space to play. But no sense of restraint or restriction afflicts The Flying Pig, which is released on the pianist’s own Resteamed label and surely deserves a place among the most satisfying products of a recording career that is now in its seventh decade. At 86, Stan is three years older than Ahmad Jamal, whose longevity is held to be a thing of wonder; just listen to the long piano solos on the title track or “Silent Percy”, as full of character, wisdom and sharply focused energy as ever.”

“Stan Tracey has pulled out of two Scottish jazz festivals recently due to illness, so it’s good to hear from this album, recorded earlier this year, that at 86 he remains as sharp-witted as ever on piano and is still committed to nourishing youthful talent. These six tracks also contradict a statement he made some time ago – that he wouldn’t be composing any more music. A visit to the First World War battlefields in Northern France, where his father was wounded and captured in the fighting, has clearly inspired him: the smart, businesslike hard bop of Bouncing Bertha, Silent Percy and the title track, the relaxed, amiable feel of Weary Willie and the bright, dancing Narpoo Rum all find Tracey soloing with well-developed ideas and vigour while his young frontline of Simon Allen (saxophones) and Mark Armstrong (trumpet) play with a lively sense of enquiry and forthright personalities. Ballad For Loos, not surprisingly, offers rather more reflection but otherwise this is finger-snapping Britjazz from its acknowledged godfather.”

“Pianist and composer Stan Tracey, now 86, recently recorded this characteristically craggy and bustling set following a pilgrimage in his father’s footsteps to the first world war battlefields – but, as usual with Tracey, no sobering theme can blunt his appetite for tenacious, hard-punctuated swing, tightly nailed piano solos, and in this case a small-band sound somewhere between Art Blakey’s Jazz Messengers and the Milestones Miles Davis group. The trio is joined here by Mark Armstrong on trumpet and Simon Allen on saxes, and the six tracks include the clangy Bouncing Bertha with its lithe alto-sax break and warm hard-bop trumpet solo and the cryptic and triplet-packed Weary Willie. Tracey takes his time with some of the piano improvisations, but he occupies the space with genuinely arresting fresh thoughts. It’s trademark Tracey, but even more sharply focused.”

“Ever since his 1965 Under Milk Wood suite, Stan Tracey’s compositions have managed to capture the essence of their subject, or rather of his feelings about that subject. This one was sparked off by a visit to the site of the Battle of Loos, where his father was wounded and captured in 1915. All six parts bear titles taken from the trench newspaper, the Wipers Times. With his oblique and inimitable turn of phrase and knotty, trenchant piano style, this is vintage Tracey. His long-standing trio is joined here by two powerful newcomers, trumpeter Mark Armstrong and saxophonist Simon Allen.” 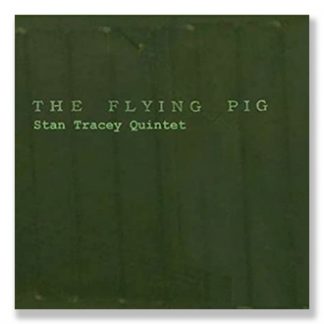 You're viewing: The Flying Pig £8.99
Add to basket