From Stan, With Love (Double CD)

These two albums were made in October 1967 and August 1968. The earlier one, With Love From Jazz, is the last 1960s recording by Stan Tracey’s quartet with tenor saxophonist Bobby Wellins. By 1969, when the group reconvened to make Free An’One, altoist Peter King had replaced Wellins. The second album, We Love You Madly, is one of several Tracey big band sessions between May 1968 and October 1969, and as its name suggests (using the Ducal phrase addressed to audiences everywhere) it is a collection of Ellingtonian material, plus Stan’s affectionate tribute in the title track.

Just a few bars of the translucently beautiful ballad, ‘Amoroso, Only More So’, on With Love From Jazz displays the extraordinary rapport between Bobby Wellins and Stan Tracey. As the celeste gives way to the piano, Bobby edges in with the melody, and they breathe through the tune as one (followed every step of the way by Dave Green’s intuitive bass playing). When I spoke to Bobby in 2011 about the empathy between him and Stan, he said, ‘There’s been no discussion with Stan and I over the years about the rapport. There wasn’t any need for discussion, because it was just there. It’s never been any different. It’s difficult to explain, of course, and maybe some intellectual might explain it, but it just works.’

Stan and Bobby first played together in the early ‘60s with Tony Crombie at the Flamingo in Wardour Street. ‘That was a dream time for me,’ recalled Bobby, ‘because Tony was one of my great idols. Stan I’d heard of, through him working with the Ted Heath band. But we’d never met before, and when we did, I had a feature “Caravan”, and that was when I suddenly thought, “This guy! His accompaniment is just wonderful!” It was inspiring and I think that’s where the blossoming of me as an improviser started.’

Stan and Bobby were both in the New Departures Quartet that Victor Schonfield recruited to work with jazz poets Michael Horovitz and Pete Brown, and they recorded in that configuration. But the immediate precursor to the band on this record (and which, with Green’s predecessor Jeff Clyne on bass, recorded the jazz suite ‘Under Milk Wood’) began while Stan was house pianist at Ronnie Scott’s old place on Gerrard Street.

‘The reason that quartet came together,’ Bobby told me, ‘was because Ronnie Scott was a compulsive gambler, and across the road from the original club was Italian Jock, who worked for one of the “firms” in London and ran this little nightclub. It was mainly for the guys of that fraternity to go and gamble, and Ronnie would be in there. When Ronnie was on a roll, Pete King would ring me up and say, “Can you do tonight for Ronnie?” And so that’s how I came to play with Stan — and if Ronnie was on a real roll, it would be two nights or three nights! That’s how Stan and I really got together.’

All the quartet music here was composed by Stan Tracey, and the album gets off to an exhilarating start with Bobby reeling off a series of blues choruses in Stan’s celebration of the miniskirt, ‘Everywhere Derriere’, just as he might have done at Ronnie’s Old Place. ‘Love Now, Weep Later’ is one of Stan’s typical spiky mid-tempo themes, whilst ‘Sweet Used To Be’ is a touching ballad, with Bobby totally secure in his upper register. Yet when we listened back to his playing from this period, he said, ‘I wasn’t in good shape at all. I was on my way to becoming a serious narcotic addict, so when I think back about this, I was a poor little lost soul somewhere. I didn’t know where I was or what was going on, and yet the music sounds rather nice.’

Stan’s solo on ‘Lovers’ Freeway’ is a perfect example of his dramatic placement of chords, almost subverting the underlying rhythm and harmonic sequence, except they’re held firm by the immaculate teamwork of Dave Green and Jackie Dougan. ‘Two Part Intention’ is one of those 32-bar pieces, in which Bobby and Stan excelled, that remind one of another tune that you’ve heard somewhere before – and you probably have! A fine moment here is the Green-Wellins duet.

‘Undercover Lover’, using chords built up from the ‘black notes’ of the piano, is a group exercise in texture, with Jackie Dougan’s tom-toms adding tonal variety, before his brushes create space for Stan’s and Dave Green’s solos. ‘Three Times Loser, Three Times Blueser’ (with a slightly different line-up) begins almost as if percussionist Guy Warren of Ghana — one of the characters of the 1960s London jazz scene — had suddenly arrived in the studio with his whistles and hand-drums. In fact there’s some subtle over-dubbing here, but the headlong rush of the piece is exhilarating, with Stan on vibes.

Ten months later the big band was in the studio to love Duke Ellington madly. Stan told me in 2010, ‘Ellington is my main man I guess, everything about him: his compositions, his arrangements, and particularly his piano playing. It’s knocked me out for all these years, and I still listen to it. Originally I was more taken by the individual players in his band and the arrangements. It wasn’t until about the late fifties that he started doing things on the piano that knocked me out.’

By 1968 Stan’s records were being produced by Denis Preston through his Record Supervision company, an industry pioneer in packaging and selling its artists’ work to a variety of labels. This also meant that Preston used every opportunity to ‘lend’ some of his key musicians to the other projects that he produced, including this one, which he planned to release to mark Ellington’s 70th birthday in April 1969. I had naïvely assumed that when Stan arranged these pieces to feature Don Rendell, Ian Carr, Joe Harriott, Tony Coe and Acker Bilk, he already had those players in mind, just as Ellington wrote for specific soloists, but Stan said: ‘No! That was me doing what I was told to do by Denis Preston. He said, “These’ll be the soloists — off you go”.’

Looking back, Ian Carr, (who made five Rendell-Carr Quintet albums for Denis, plus more with Amancio D’Silva, Guy Warren and the EmCee Five) said, ‘Denis never paid you very much money for anything, but without him the scene would have been very much poorer and a lot of the music wouldn’t have happened, like the things he did with Joe Harriott, and with the Stan Tracey Big Band, where I had one track.’ Carr’s fluent flugelhorn solo, on ‘I’m Beginning To See The Light’, is introduced by the muscular rhythm section of Stan, bassist Lennie Bush and drummer Barry Morgan. Their forceful playing gives the whole album much of its character. But they also know when to hold back as in Stan’s sumptuous setting of ‘Creole Love Call’ for Acker Bilk, making its more dramatic moments all the more effective. Stan told me: ‘I liked Acker’s playing, not only then, but whenever I heard him.’

The whole band opens and closes the record, starting with a radical update of Ellington’s 1928 ‘Blues With a Feeling’ (which also includes cameos by each of the album’s featured soloists) and closing with Stan’s ‘We Love You Madly’. Stan himself takes a far more prominent role than Ellington did on 1938’s ‘I Let A Song Go Out Of My Heart’, his dense chording reflecting the full sound of his band writing. Don Rendell’s soprano saxophone offers a refreshingly different perspective on Billy Strayhorn’s ‘Passion Flower’, whilst Joe Harriott’s elegantly phrased ‘In a Sentimental Mood’ shows that he might well have been a fine Ellingtonian balladeer himself. Stan’s arrangement neatly shows both sides of Joe’s musical character — from romanticist to fleet-fingered modernist — with the sudden change of gear in the second section. But for me the highlight of the album has always been the perfect marriage of band and soloist on ‘Lay-By’, featuring Tony Coe (a piece that Denis Preston picked for his Lansdowne series sampler, Jazz Explosion).

Tony once discussed with me how such memorable recordings occur, saying: ‘These things happen at funny times, you can be playing a gig in a pub, and you play one of the best solos you’ve ever played. Roy Eldridge used to speak about this, he used to say once a year you got the perfect solo and it kept you going for the rest of the year.’ 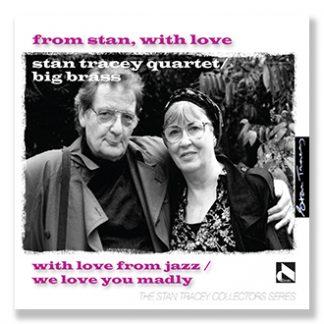