This is our second album and I believe it documents our progress as a unit over the last two years very well. Each musician respectfully puts everything into the quintet’s music and we’ve now reached a more intuitive level on gigs, which I hope has been successfully captured on this recording. It’s a joy for me to watch these really talented musicians mature and develop, and as always it’s a pleasure to be working in their company.” – Clark Tracey, March 2016.

“Two years on from the quintets impressive debut, Meantime, Tracey is once again at the helm and presenting the same line-up for another helping of contemporary hard bop. If keeping the flag flying for no nonsense hard swinging straight ahead jazz is a crime then Clark and his men are guilty as charged in a set of standards (no original compositions this time out), that cannot fail to please. As is his wont, Clark’s liner notes occupy little more than a paragraph on the inside cover of the CD sleeve, and in his brief endorsement of his four young colleagues describes the progress of the quintet since the last recording and the intuitive level of understanding that is now being attained when playing live. These few lines are all that is needed however, as the music backs up Tracey’s comments ten fold. The rhythm section is tight and superbly attuned to the soloist and each other, and knowing just when to shift up the gears or throttle back in a manner that is remarkable in players so young, and for a band that has been playing together for just a few years the degree emapthy is to be marvelled at. The band give nothing less than a hundred per cent and if looking for proof of just how far they have come, one should look no further than the ballads featured, one to feature each of the frontline. First up is Henry Armburg Jennings on Victor Feldman’s ‘Falling In Love’ and his solo is a model of logic and natural storytelling. No rhetoric only poetry in a beautiful solo that brings to mind Clifford Brown’s full tone and lithe lines that are flowing, with not a note that is wasted or superfluous. Saxophonist Chris Maddock, takes his chosen feature ‘Why To Change Me Now’ on tenor, which for my mind is most individual sounding horn, playing with a big breathy sound that captures the essence of Cy Coleman and Joseph Allan McCarthy’s song whilst having plenty to say of his own. The strength and emerging individuality of Maddock’s tenor playing is again to the fore on a stunning rendition of another Victor Feldman composition (and also coincidentally linked with Miles Davis) ‘Joshua’. After the introduction and solid rhythm ic foundation laid down by bassist Daniel Casimir, the rhythm section fire on all cylinders to power along the two fontline horns through a couple of excellent solos. Armburg Jennings once again shows his allegiance to Brownie in a fleet fingered yet delicately paced outing that is totally absorbing whilst Maddock kicks things off with a blistering solo that owes more to George Coleman forthright playing than to the omnipotent presence of John Coltrane that is heard in many a tenor player, young or old. All in all a really solid and uplifting set, that shows that Tracey has surely introduced us to another four young players to watch. It is will be interesting to see how the quintet continues to develop, and what these young turks will do when they step out on their own.” 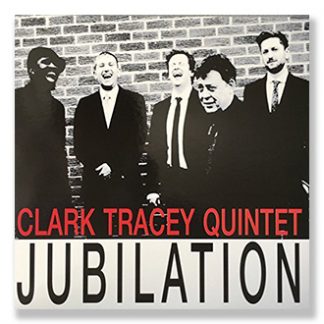 You're viewing: Jubilation £8.99
Add to basket