‘Intensity’ captures Hayes at his peak performing at Ronnie Scott’s club in Gerrard Strreet in 1965. Hayes’s quartet includes Terry Shannon on piano with bassist Jeff Clyne and drummer Benny Goodman. The three lengthy performances represent a typical mid-Sixties Hayes set, an up tempo opener, a standard ballad and a waltzing modal vehicle, each featuring Hayes’s typical extended solos. This newly discovered recording, which has lain hidden for over 40 years, provides a most potent example of Tubby doing what he did best, live in a club setting with the gloves off. The multi-instrumentalist Tubby Hayes was one of Britain’s greatest jazz musicians. In a tragically short career, he died at the age of 38 in 1973, Hayes is best known for his collaborations with Ronnie Scott in the innovative group, the Jazz Couriers, in the 1950s. During the 1960s he appeared in the USA on several occasions, including a live recording with James Moody and Roland Kirk, fronted his own big band, sat in with the Duke Ellington’s Orchestra in 1964 and was featured at many European festivals. Hayes was making his mark as a solo artist when heart troubles interrupted his career, leading to his death in 1973.

“Hayes’ stamina and euphoric delight in his craft is represented…formidably soulful and dramatically earthy…a scalding and impassioned set.” 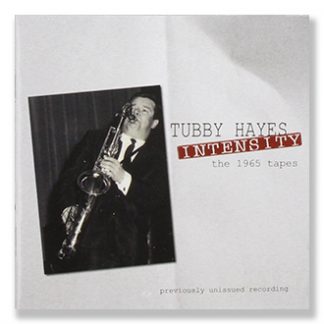 You're viewing: Intensity £8.99
Add to basket