View basket “For Heaven’s Sake (Download)” has been added to your basket.

The Sunday Times: January 2, 1966: “Three of the top 1965 LP’s which have given me most pleasure are home-produced – with Stan Tracey’s Under Milk Wood likely to become a classic in anyone’s musical language”.

The Sunday Times: February 29, 1976: “I have unsurprisingly, always considered Dylan Thomas’ “Under Milk Wood” a minor masterpiece. The jazz suite which Stan Tracey wrote eleven years ago, inspired by Thomas’s work, has been likewise hailed. Put the two together, though, and you have a transcending experience of triumphant delight, both moving and joyous…… A superb production which deserves an album of its own”.

These extracts reflect the enthusiasm which I have always felt both for Stan Tracey’s music and Dylan Thomas’s words. The only surprise is that it took the best part of a decade to effect the marriage between music and words. Although BBC2 TV had first presented Donald Houston and the Tracey quartet in Under Milk Wood, it wasn’t until February 1976, when the show took to the road, that I enjoyed the “transcending experience” of hearing it at the New London Theatre and writing about it in The Sunday Times.

That experience is what’s now captured on this album, and to have played a part in ensuring that works of art one has believed in for so long should thereby be available to the widest possible audience is the most satisfying possible outcome for any music writer.

What’s so marvellous about it all? Well. the words of Dylan Thomas came first, of course. Under Milk Wood was written for radio, and although it reads beautifully on paper, only when the words are spoken can its full splendour be appreciated. As a portrait of characters, places and events, in a small Welsh seaside town, it is quite marvellous.

The rich language and imagery which were Dylan’s great gift are abundantly deployed. The quick vignettes of character are masterly. Pomposity is slyly debunked; goodness is gently appreciated; the follies, hopes, loves, desires, failings of the people he deals with are treated with warmest understanding. Dylan can be very funny and very witty indeed about Llareggub (this made-up town name, with its irreverant inversion, was typical of his impish nature) bur he can be so kind and moving too. he loved this place, and the love shines through.

Stan Tracey was in the midst of his long and distinguished sojourn (1960-1968) as the resident pianist at Ronnie Scott’s Club, undoubtedly the most famous jazz mecca in the world, when in 1963 he composed his Under Milk Wood suite to reflect his own feelings about Dylan’s splendid work. Suites of this kind are always suspect: can music ever fully convey the moods and nuances of words? Well Tracey’s certainly did. I Lost My Step In Nantucket, for instance, perfectly brought to life Dancing Williams, crew mate of the erratic old sea captain, Cat. Pen Pals mirrored the warmly comic romance of Miss Jones and Mog Edwards, the two middle aged shopkeepers. The title song, a jazz ballad, was as affectionate and beautiful as Thomas’s own overall vision of his Welsh landscape.

Dylan Thomas, I suppose, needs no advocacy from me to underline his honoured place in modern literature. He has, after all, been an examination subject for years. But Stan Tracey’s position is less acknowledged. It’s worth reminding ourselves that his career in music is now well into its fourth decade. Since he began at 16 as a piano accordionist, has has done so much in and for British music. The highlights have included his stay with the Ted Heath band (1957-1959); his eight years at Scott’s where he accompanied virtually every great jazz artist (and style) under the sun – Ben Webster, Roland Kirk, Sonny Rollins, Anita O’Day, Jimmy Witherspoon etc, etc: his big band, Ellington-influenced, of the late 1960’s.

But this is only part of it. He’s never stopped composing, and literature has often been the inspiration of his suites (Alice In Wonderland, for example, sparked off another). Above all, as he nears 50, Stan has never grown old in his attitudes to music. He continues to experiment, to progress, to attack new barriers, often at cost to himself, since some of his more advanced work has not appealed to those who enjoyed him in a more conventional jazz-trio, suite-composer context. He is one of the finest and most underrated musicians in the world.

This album should establish (or re-establish) his place once and for all in the mainstream of music which is of the highest quality and, at the same time, enjoyable and accessible to a very wide audience of diverse tastes. And his partnership with Donald Houston is a most happy one. Houston it was who originated the role of narrator in the first stage presentation of Under Milk Wood at the Edinburgh Festival, and later in the West End, on Broadway and on television. He is a marvellous actor, and I can think of no one in the world who could match his performance of Dylan’s work.

In this presentation of Under Milk Wood, words and music are perfectly complementary. Sometimes the emphasis is musical, with the playing of Art Themen and Tracey incredibly sympathetic. On other occasions music which is perfect in tone and volume enhances both the words and Houston’s musical voice. From time to time there are, rightly, only the words. And I guess that the finest moments of all are those when Houston’s sensitive readings explain, as it were, the shapes and colours of the music, and vice-versa. An example of this … “Eastern music undoes him in a Japanese minute” declares Houston, leading into the spiky melody of No Good Boyo.

As Tracey’s music and Dylan’s words are, separately, now acknowledged to be outstanding works of their separate kinds, so I believe this marriage of the two, performed with love and inspiration, will achieve that status in the future. It’s a whole world of enjoyment, revelation and entertainment.

© Derek Jewell, Jazz and Popular Music Critic, The Sunday Times of London Recorded in London at the Wigmore Hall May 22, 1976. 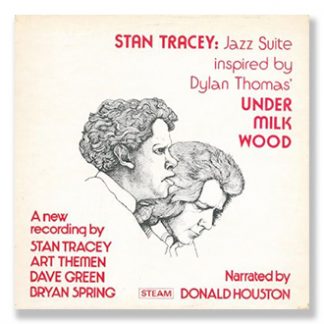 You're viewing: Under Milk Wood – Re-Issue with Donald Houston (Download) £7.99
Add to basket