View basket “Jubilation” has been added to your basket.

Drummer/composer John Randall, although still in his early 20s, has won numerous awards for his compositions and drumming and is already making a significant impact on the UK jazz scene. ‘Insomnia’, his debut recording, features young, modern, forward thinking music that, whilst always influenced by the musical traditions of jazz, sees the raw energy of rock and the deep groove of hip hop sit alongside abstract textures and electronics. Complex rhythmic and harmonic ideas are made to sound simple and catchy. It is music of contrasts, where a sub bass rock-out can dissolve within seconds into a rubato ballad. Underpinning all of this is the musicality of a band of virtuosic improvisers and the concept of playing honest music that does not draw boundaries between different musical genres or traditions. Randall graduated from Birmingham Conservatoire with a first class honours degree in jazz, one of only a handful of people ever to have done so. He was recently awarded a Yamaha-Classic FM scholarship for Outstanding Jazz Musicians, an award that came soon after him winning the John Mayer Memorial Prize for Composition. Heard by drumming legend Clark Tracey earlier in 2008 he was instantly offered a record deal with Tracey’s label TenToTen Records. In April the band, in its quartet line up, won the Birmingham Conservatoire Dave Holland Jazz Ensemble Award. Dave Holland adjudicated the event and commented on how impressed he was by the modern, forward-looking musical concept, with its strong creativity, diverse programming and wide emotional range. 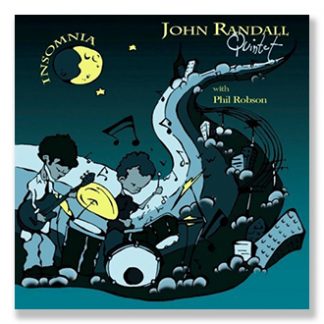 You're viewing: Insomnia £8.99
Add to basket