“On Stan Tracey’s triumphant Barbican concert at the end of January, the 81-year-old pianist/composer ran through most manifestations of his talents. But Tracey’s all-improv duet with fellow-pianist Keith Tippett, a partnership untried in 15 years, stole the show, exposing new musical and emotional depths in Tracey that orthodox jazz doesn’t often draw from him. Not many examples exist on record, so this previously unreleased set at London’s ICA in 1977 is a precious item. There’s not much in the way of conventionally jazzy licks, but the music is playful, conversational and, at times, unsentimentally romantic and warm. Tippett frequently favours fast, whirring note-cycles that Tracey bangs hard chords against, or seamlessly droning low-end thunders that Tracey sometimes joins and sometimes illuminates with glittering treble sounds. At times they get close to each other with a haunting sympathy. On Vela Pulsar, there’s an uncanny empathy to the way they play percussive sections together and then stop as if a switch was thrown, or join on a tone-centred drone like an orchestral string section. Streams of intertwining sound become a cat-and-mouse game in Parallax, and the title track has a long opening section as pure, pulsating texture before tentative shoots of melody start to grow. Occasionally there are snatches of blues phrasing, and it evolves into a highly rhythmic kind of lateral swing. Supernova is a vivid insight into the infrequent work of one of the great improvising partnerships.”

“Recorded at the ICA in 1977, this album captures 50-odd minutes of peerless improvising from two masters of the craft. Always absorbing, often exhilarating, moving easily between rumbustious energy and touching lyricism, the two pianists strike sparks off each other, indulge in combined dazzling, driving runs, or muse quietly together Ã§Â¨Â¡tever the mood, though, as Clark Tracey’s liner note suggests, ‘intuition, respect, energy and romanticism are just some of the qualities to be found in abundance on this recording’. A rare and valuable issue.”

“Free improv isn’t everyone’s bag, but whatever nexus of inspiration was in the air between Tracey and Tippett at London’s ICA in August 1977 produced something extraordinary..” 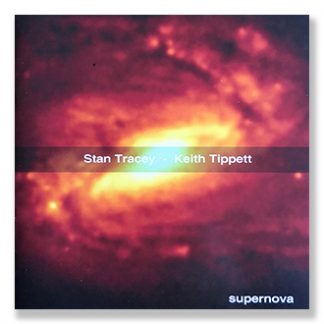 You're viewing: Supernova £8.99
Add to basket