There is nothing special about this record. Except that a British big band is actually recording; except that Stan Tracey is one of our few jazz musicians of world class; except that he wrote this brilliant suite mostly between the hours of four and six on a number of winter mornings, partly on trains and buses; except that there may be no more such suites unless someone buys him a few more records: except . . . Nothing, you see, is quite what it seems, nor means quite what it says. Like that opening sentence. Like in Wonderland. This could become very involved indeed. Let me explain. The fact is that in 1965 Stan Tracey, the March Hare of Frith Street, produced a suite, inspired by Dylan Thomas’s Under Milk Wood. Played by his quartet, if turned out, in the opinion of several Mad Hatters, otherwise critics, to be a powerful runner for the title of Best British Jazz Record in History. Tracey went into Milk Wood largely because he owns a record of the Thomas classic. He knows it backwards; he was moved by the beauty, the magic, the starless-and-bible-blackness of Thomas’s language. He owns (at time of writing) only one other narrative record, Alice in Wonderland, with which his ears have long time been bent usually at the request of his children, Clark (5) and Sarah (3). He likes that too. And it seems inevitable that, after Milk Wood, he should have put his feelings about Lewis Carroll’s story into music.

This time, though, the writing is for big band, which challenges Tracey’s skiIls even more sharply than composing for the looser quartet framework. If seems to me to have come off quite as superbly as did Milk Wood; indeed, the instrumentation gives Tracey far more scope for his very idiosyncratic talents. There is a richness, depth and variety to this music which is thoroughly captivating. The dawn-patrol flavour to Tracey’s composing life is not a Carroll-like fantasy. It is one of the hard facts of earning a living in a hard world. Most nights he plays till deep into the morning at Ronnie Scott’s Club in Frith Street, London. He goes home by bus at around 4 a.m. and finds that he writes best before he goes to bed. He also finds the bus a tolerable place in which to jot down musical ideas; he does the same in the train that takes him to work.

The temptations, and perils. of “programme music” are well-known. The composer can’t do more than express in music his own reactions to the character or situation a writer has created through the medium of words. The listener may not see it the way the musician does; equally he may read into the music far more than is really there. Tracey is sensibly unpedantic about this. He aims to do no more than “slant the mood towards the title”. But however modest he is about this, Tracey’s Alice score has completely caught the mad, strange whimsical world of Carroll. This, in a sense, springs from Tracey’s own musical gifts. He is an extraordinary pianist, always choosing the unusual way of saying things. He must be tired of being compared to Thelonious Monk, especially since he has now evolved his own completely personal style, but he shares with Monk the love of strange-sounding themes, of fractured rhythms, of calculated discord.

Tracey’s is, in the true sense of the word, a fantastic style. Carroll was a fantasist too. Every piece on this record reflects Carroll’s story in some way. Teatime Gavotte, which has solos by Bobby Wellins. Keith Christie and Tracey himself, is as full of odd quirkiness as was the tea party. Tracey’s piano, particularly, sets the mood, but the composer won’t say which soloist represents Mad Hatter, Dormouse or March Hare. Portrait of a Queen, a fast waltz, with Eddie Blair and Wellins taking solos, sounds both a touch zany and quite overwhelming :well, wasn’t she? Summer Hallucinations, a showpiece for Alan Branscombe and the saxophone section, has the faintly unreal quality of a hazy, hot, summer’s afternoon. But I’ll not strain the point too much.

Other details : Afro-Charlie… has solos by Wellins and Les Condon; the tenor on Pig and Pepper (quartet only) is Ronnie Scott, who is also heard on the title track; Murdering the Time features Kenny Baker and Christie. Fantasies in Bloom is both the tune which has Tracey’s longest solos and the one I happen to like most of all. Lovely and languid, it has the feel of Ellington at his best, especially in the beauty of the saxophone sounds and the cleverness of the writing for brass. One more thing : this music swings like mad, always. And that’s to do, one suspects, with the infectious way the musicians got caught up with the fun of the music at the recording sessions. Those sessions were a touch mad too. At one of them, when the band was trying hard to get the ending of Murdering the Time right (it’s very difficult to play, time-wise), everything seemed perfect apart from a mysterious extraneous noise. “Harry”, someone explained. “had to blow his nose in the last eight bars”. I hope you enjoy the music as much as I do. Me, I’m just starting off a collection to buy Mr. Tracey another record. Hamlet, maybe?

“Pianist and composer Stan Tracey is a legendary veteran on the British jazz scene, in his own quiet way, a master musician. Alice In Jazz Land originally released in 1966 is the follow up to Tracey’s Under Milk Wood album, one of the best known British jazz albums. It’s criminal that Alice! has been unavailable for so long: it’s a great record. A crack team of legendary British players was put together for this session. But Stan himself sets the tone in the first thirty seconds of the title cut with an aggressive, audacious piano intro that makes you sit up and go ‘Wow!’. This is an album that exemplifies the classic British big band sound: tart, bright, punchy. But it also pushes the envelope way out with its’ confidence and wild musical invention. It’s full of fantastic loud, huge, wide chords that are big enough to stick your whole head in. This album is a much a product of its time as the Beatles’ Revolver, and it’s no coincidence that it was also recorded at Abbey Road (and beautifully recorded at that). British music and culture was at a zenith, and you can hear the sunshine and swagger in the likes of ‘Pig And Pepper’ and ‘Summer Hallucinations’. ‘Afro Charlie Meets The White Rabbit’ has a psychedelic edge with outrageous discords and an off the wall arrangement which never meanders or loses focus. The lovely ‘Fantasies In Bloom’, provides some breathing space. It seems dangerous to single out one player but I particularly love the trumpet section and Kenny Baker’s trumpet feature on the intense ‘Murdering The Time’. Right up to the glorious conclusion of ‘Portrait of A Queen’ there’s not a precious second wasted in 38 brilliant minutes. They really don’t make ’em like this anymore. Thankfully you can hear ’em again, thanks to Clark Tracey and his programme of reissues of his father’s music: truly a labour of love in a very bad world. Great stuff!”

“While the jazz suite based on ‘Under Milk Wood’ has righlty been vaunted as Tracey’s masterpiece, relatively little has been written about his foray into big band writing and playing. At the time of this recording in 1966, Ellington was still going strong and enjoying something of an Indian summer with ‘The Far East Suite’, while other emerging leaders such as Gerald Wilson were recording prolifically on the west coast for Pacific Jazz. Meanwhile in the UK, Tubby hayes was soon to release his own take on the big band sound with the excellent ‘100% Proof’. The album ‘Alice in Jazz Land’, first issued on UK Columbia, reveals both his American compositional influences and a distinctly British execution, at times almost rustic, yet full of passion. It has a very modern mid-sixties recording feel and a fascinating choice of titles to match. Key tracks include ‘Fantasies in Bloom’ and ‘Teatime Gavotte’. However, the album should be viewed as a whole as a triumphant attempt to transpose the small group sound that Tracey was so fond of into the fuller big band ensemble. A much underrated album that deserves its place in the pantheon of 1960s British jazz.”

“The octogenarian Stan Tracey has run into such sustained acclaim for his various ventures over the past couple of years that he has almost found himself recast as a wholly contemporary musician – which, in the vigour and invention of his playing, he is. But if it borders on disrespectful to get nostalgic about Tracey’s past, it’s good to be reminded of an earlier period in which he was also hot jazz news – the 1960s. This crackling 1966 big-band set is more remarkable for its endlessly evolving ensemble subtleties than its improvising, Tracey furnishing pungent new rejoinders and creative disputes with both the soloists and the original themes. The Ellington influence is always clear on Tracey’s big-group ventures (such as the swoony Fantasies in Bloom), and the title track confirms how early Monk-inspired conceptions of rhythm took root in the pianist’s chordal punctuation. Summer Hallucinations, with its gliding alto-sax solo, recalls the Cool School, and Murdering the Time is a raucous, squalling flyer. The contrast between Bobby Wellins’ eccentric lyricism and the late Ronnie Scott’s relaxed swing in the tenor-sax section is a bonus.” 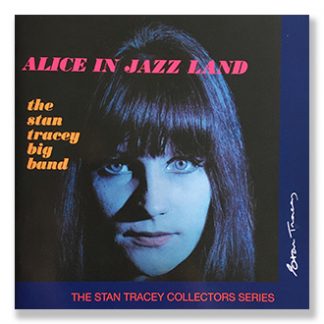 You're viewing: Alice In Jazz Land £8.99
Add to basket